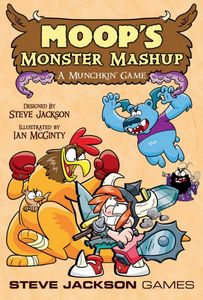 View basket
Category Family Games Tags Munchkin
The magnificent magician Moop is mashing up monsters to meet the marauding munchkins. He's created bizarre new animals such as the Owligator and Kangarooster! But the heroes can fight back with their own mixed-up weapons, including Sockodiles and the Beaver Cleaver. This version of Munchkin is the craziest ever...but it's still Munchkin, so the first player to Level 10 wins!

Moop's Monster Mashup is a standalone game, but can also be combined with Munchkin or any of the Munchkin games.

* Based on residence in South Africa. Tax rates for other countries will be calculated at the checkout. Price exclusive of tax: ZAR 413.04.